You are here: Home / Investment News / Harbour Views: A lost decade in Europe?

Early in February German 10-year government bond yields dipped below Japan’s for the first time, reflecting a bleak market view of European prospects in the decade ahead. But, as the low long-term rates imply, will Europe also follow Japan’s ‘lost decade’ example? According to Harbour Asset Management head of fixed interest, Christian Hawkesby, the European pessimism could be overdone.

In the final week of January 2015, a snow storm was predicted to hit the East Coast of the US.   The world’s best meteorological weather forecasting models warned that this could be the worst storm ever to hit New York. State Governors televised warnings to their citizens. The New York subway system was shut down for the first time, and shelves in grocery stores were cleared as people prepared to be stuck inside for days. As is turned out, barely enough snow fell to build a snowman.

Economic and financial forecasters have also struggled in recent times, with a storm of demand instead hitting the bond market. At the start of 2014, the consensus forecast was for the US 10 year yield to rise a little from 3%; instead it finished the year at 2% and fell even further to 1.65% by the end of January 2015. As part of this global move, the New Zealand 10 year bond yield fell 45 basis points in January to 3.20%, well below the OCR and around all-time lows. In Europe, long-term yields are so low that the bond market is effectively pricing a lost decade of economic activity.

The main catalyst to this global shift has been oil, deflation worries, and Europe.   The price of oil fell from $100 to $60 per barrel over the second half of 2014 and continued to fall sharply in January to a low of $46. 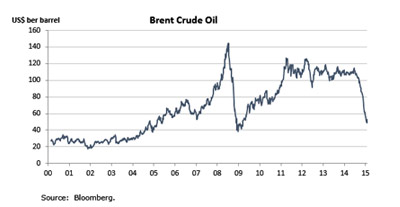 As net importers of oil, most developed countries (such as the US, Europe and New Zealand) typically benefit from lower oil prices. With consumption of petrol and gas reasonably insensitive to changes in price, a drop in the price of oil translates directly to more cash left in the wallets of consumers (i.e. disposable income improves). Therefore a sharp drop in the oil price has a similar effect as a tax cut for western consumers.

However, with Europe right on the cusp of deflation, the bond market has been much more focused on the bad news from the fall in oil prices – that is, the effect it has reinforcing the recent fall in European inflation expectations, making it even harder for the ECB to achieve its inflation target of 2%.

With this backdrop over the course of January we saw a remarkable string of central bank surprises:

While all these policy moves could be justified on domestic grounds, collectively they give the impression of a currency war, where the net result is a race to the bottom for term interest rates. Indeed, there is even a question about what is the lower bound for interest rates. While the US Fed and Bank of England decided in 2009 to stop cutting rates at 0.25% and 0.50% respectively, the ECB (-0.25%), Danmarks Nationalbank (-0.50%) and SNB (-0.75%) have all shifted policy rates well into negative territory, creating some peculiar incentives and motivations in global capital markets. We are living in a world where Europeans earn a better return holding cash under their mattress than in the bank, and where Europeans consider Japan to be a high yielding bond market.

Catalysts for a change in the weather

If December and January have been a storm in the global fixed interest market, what are some potential catalysts for a change in the weather?

Here are some potential candidates for a change in atmospheric conditions:

At the short end of the yield curve, we continue to expect a period of near term stability. With New Zealand economic growth moderating from a swift pace in mid 2014, the risks to the outlook are more evenly balanced. This means a cut in the OCR is a more plausible scenario if the NZ economy was faced with a significant negative shock. However, we don’t believe that it is currently the RBNZ’s intention to drop interest rates. Instead we view their hint at a rate cut as a purely tactical ploy to ensure the NZ dollar continues to face downward pressure.

At the long end of the yield curve, the recent trend for longer global bond yields has been relentless and showed no sign of losing momentum in January. In part the move is understandable, given the fall in oil prices raising the spectre of deflation in Europe, and the string of central bank surprises in January. However, there reaches a level where policy rates and bond yields at historic lows can only be justified if the market expects a lost decade of economic activity in Europe acting as a drag on global growth and inflation.   At some point, bond yields become sensitive to a change in sentiment, especially if there is evidence that the ECB’s QE is actually successful and supports economic activity, or a change in focus towards the ongoing strength in the US economy.

Harbour research is available at www.harbourasset.co.nz

The New Zealand Fixed Income Commentary is given in good faith and has been prepared from published information and other sources believed to be reliable, accurate and complete at the time of preparation but its accuracy and completeness is not guaranteed. Information and any analysis, opinions or views contained herein reflect a judgement at the date of preparation and are subject to change without notice. The information and any analysis, opinions or views made or referred to is for general information purposes only. To the extent that any such contents constitute advice, they do not take into account any person’s particular financial situation or goals, and accordingly, do not constitute personalised financial advice under the Financial Advisers Act 2008, nor do they constitute advice of a legal, tax, accounting or other nature to any person.. The bond market is volatile. The price, value and income derived from investments may fluctuate in that values can go down as well as up and investors may get back less than originally invested. Past performance is not indicative of future results, and no representation or warranty, express or implied, is made regarding future performance. Bonds and bond funds carry interest rate risk (as interest rates rise, bond prices usually fall, and vice versa), inflation risk and issuer credit and default risks. Where an investment is denominated in a foreign currency, changes in rates of exchange may have an adverse effect on the value, price or income of the investment. Reference to taxation or the impact of taxation does not constitute tax advice. The rules on and bases of taxation can change. The value of any tax reliefs will depend on your circumstances. You should consult your tax adviser in order to understand the impact of investment decisions on your tax position. To the maximum extent permitted by law, no liability or responsibility is accepted for any loss or damage, direct or consequential, arising from or in connection with this document or its contents. Actual performance of investments managed by Harbour Asset Management Limited will be affected by management charges. No person guarantees the performance of funds managed by Harbour Asset Management Limited.