You are here: Home / Investment News / Harbour Views: China: is the dream over?

A hard landing in China is the stuff of nightmares. But after scrutinising the data, Oyvinn Rimer, director & research analyst at Harbour Asset Management, finds some comforting facts for NZ

China is difficult to analyse. The economic data can be ropey and Government intervention coupled with the absence of market pricing add to the challenge of determining how China will respond to Government policies.

The economic transmission mechanism does not fit classical economic models. Therefore, it is easy to default to a position of thinking it is too hard to analyse and conclude something must be badly wrong.

Since the Chinese share-market started its dramatic fall in June 2015, countless negative headlines have suggested that the Chinese dream is over, implying a global recession is imminent.

Undoubtedly, China faces some very significant challenges. These include high debt-levels, systematic over-investment in underperforming assets and slowing old economy sectors, such as real-estate investment and manufacturing. These will take time to address and there is likely to be multiple periods of market volatility prompted by fear around Chinese headlines and policy actions.

However, it is important to remember the policy agenda that was articulated at the Third Plenary Session in Beijing in October 2013. That agenda serves as a long-term anchor and provides a framework for thinking about China’s changing economic and social landscape.

The aim of these reforms is to transition towards a more sustainable economy with an increased focus on environmental, social and governance aspects. This is a big change in the political rhetoric and deviates from the traditional relentless push for ever-higher GDP growth.

There are obvious trade-offs between improved social and environmental policies and that of investment-led economic growth. The Chinese Government has started implementing many of the announced policies and is observing the impacts as they develop.

It is only natural that there are unintended consequences from policy implementation; especially given the centrally planned model that has ruled for decades. Any relaxation of controls require piecemeal execution to assess the effects of changes; and growth rates across the economy have started changing in response to policy-implementation and fundamental economic signals.

It is no surprise that it is the old economy that has taken the most direct hit as investments into these industries have been scaled back and increased environmental focus has challenged heavy industry to reduce emissions. This is negatively influencing Australian exports of raw materials and it is not obvious that there is a quick recovery for iron ore and coal demand on the horizon.

Although the manufacturing side of the economy is still the largest, there are encouraging signs of stability and growth across the consumer services side of the economy. Retail sales keep printing solid growth (+10.5 per cent Year on Year in August) and sentiment in the non-manufacturing (services) sector looks buoyant, with the latest PMI number printing 53.4 (a number above 50 suggests positive growth). This is positive because it represents the new economy and is a key focus-area for policy-makers.

Figure 1 illustrates how the old economy has been under pressure for some time and has declined consistently since the reform agenda of 2013.

However, the new economy performance, which includes indicators such as generation of clean energy, vehicle exports, medicine consumption and production of communication devices and computers, is much stronger. 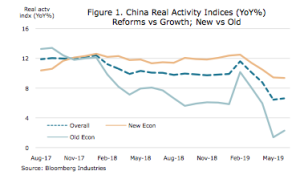 On average, the two sub-components suggest slower economic growth overall, but the stronger growth in the new economy is consistent with policy-objectives of rebalancing towards more productive sectors that are focused on services and consumption.

Consumption, coupled with improved conditions for the growing middle-class should be positive for New Zealand.

Unlike Australia, New Zealand’s main exports to China are agricultural goods and tourism. Both of which should benefit from better social safety-nets in China, which are likely to improve consumer confidence and increase spending on overseas travel and consumption of New Zealand-produced proteins.

However, we live in an uncertain world. To aid our understanding of possible outcomes, it is important to consider the scenario of a hard landing in China (e.g. Chinese GDP growth falls to and stabilises at 3% p.a. instead of the expectation of 6%-7%). Although a hard landing is not a base-case forecast, the impacts could be significant both within China and the wider region.

Researchers estimate that the cumulative impact on New Zealand GDP from this scenario in China is only -0.9% of GDP. This is largely explained by New Zealand’s flexible exchange rate, which would depreciate sharply in response to a Chinese hard landing, therefore providing a buffer for the NZ economy. Food consumption is also expected to continue to grow despite headwinds across industrial sectors in China.

Figure 2 shows the estimated GDP impacts of a hard landing in China across a range of countries. New Zealand stacks up surprisingly well. Australia’s flexible exchange rate also works to absorb most of the impact of a slowing China. It is estimated that energy exporting countries and those with currencies pegged to the U.S. dollar experience the largest negative impacts. 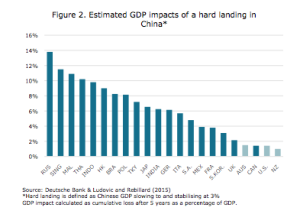 In summary, it should be acknowledged that Chinese economic headlines and unconventional policy-responses provide market risks that are likely to influence investor sentiment.

As China transitions from investment-led growth towards services, there are likely to be unintended consequences that re-ignite market jitters.

However, over the longer-term, the transition to consumption from infrastructure and exporting is the key for New Zealand and should be positive, although it is fair to expect a bit of spilt milk between lip and cup during the transition.

This column does not constitute advice to any person.
www.harbourasset.co.nz/disclaimer/