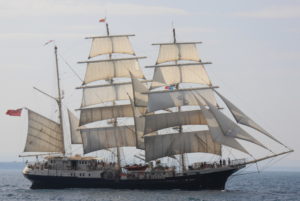 Investment News NZ (IN NZ) will not be publishing next Monday after being press-ganged into offshore sailing duties.

Due to poor advice, IN NZ is now locked into a 10-day stint as bottom-of-the-rung voyage crew for the passage from Sydney to Melbourne during the height of winter on the good ship Tenacious (pictured).

Journey conditions are not expected to closely resemble those experienced by convicts transported to Australia in the mid-18th to early 19th Centuries.

According to the ‘Convicts to Australia’ website: “Convicts were housed below decks on the prison deck and often further confined behind bars. In many cases they were restrained in chains and were only allowed on deck for fresh air and exercise. Conditions were cramped and they slept on hammocks.”

The Tenacious is an asset owned by UK-based charitable entity, the Jubilee Sailing Trust (JST), which designed the vessel to specifically cater to people with disabilities.

“[Tenacious] is the largest operative wooden ship in the world (at 65 metres and with a mast height of 39 metres) and was built in 2000 by 1,500 volunteers, including many living with disability,” the JST website says.

The Sydney-Melbourne voyage, which will serve as guinea-pig run in Australia for the Tenacious’ 10-month stay in the country, is scheduled to depart today.

Barring issues with non-compliant icebergs and the like, IN NZ will be back on deck for August 22 edition.