Kiwi Invest has called for mandatory disclosure of investment exclusions and proxy voting records for all managers marketing products under environmental, social and governance (ESG) – or like – banners.

In a release, Steffan Berridge, Kiwi Invest quantitative and responsible investments strategist, said compulsory disclosure of actual ESG-related activity could shine a light on the “practice of green washing in the fund management industry”.

“Investors deserve to know precisely how a responsible investing strategy is being implemented on their behalf, which companies their money is invested in and how ESG criteria are being applied.”

He said greenwashing should be further squeezed out of the industry with the Financial Markets Authority (FMA) also putting pressure on managers to act according to label.

The almost $7 billion Kiwi Invest – which manages funds on behalf of its sister firm, Kiwi Wealth, as well as for other private and wholesale investors – publishes both ESG-related exclusions and proxy voting records, Berridge said.

“We’re one of the few NZ managers to to that,” he said. 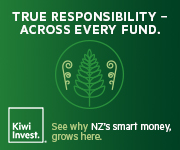 In fact, its transparent approach to ESG reporting was one factor behind Kiwi Invest recently garnering an A+ for ‘strategy and governance’ in the manager’s first rating under the UN Principles of Responsible Investment (PRI), Berridge said.

Kiwi Invest (along with Kiwi Wealth) was relatively late to the PRI signatory list, joining a group of 30-odd other NZ investment firms only this February.

According to Berridge, Kiwi Invest aimed to be ready to meet the PRI higher standards before signing up.

“Usually, managers join the PRI as an aspirational thing – and improving their real responsible investment practices over time,” he said. “But we built our RI systems before we signed, which is why we were able to earn an A+ at our first assessment.”

In the release, Berridge said Kiwi Invest filed a “full transparency report” with the PRI, although that was not required in the first year.

“The scores have given us a validation of our strong responsible investment credentials in key areas we’ve been developing, and a benchmark to improve on in others,” he said.

And while the PRI stamp is likely less influential in the retail market, Berridge said many NZ wholesale and institutional investors require the UN-endorsed accreditation as a condition of entry.

“You have to be a PRI signatory to even get meetings with some wholesale investors,” he said.

As well as a commitment to transparency, Berridge said the PRI rating reflected the manager’s consistent implementation of responsible investment across asset classes and strategies.

“We also have put the policies in place, which makes it harder to change the RI approach, increasing its longevity,” he said.

The Kiwi Invest exclusion list runs to hundreds of companies based on three filters, labeled: zero tolerance; areas of sensitivity; and, ESG exclusions (which prohibit directly held investments but not via third-party vehicles).

But while negative screening remains the high-profile end of ESG investing, Berridge said corporate engagement has great potential to bring about real change.

He said Kiwi Invest might be small on the global stage (most of the Wellington-based manager’s holdings are offshore) but it can still wield influence – especially in collaboration with other investors.

“Even though we’re not large compared to many funds outside of NZ, we still have a lot of [proxy] votes,” Berridge said.

“Investors are also increasingly working together on ESG issues to bring about corporate improvements. Although, there could be more collaboration. If everyone went to the polling booth and voted you could have a much greater outcome.”