You are here: Home / Investment News / The case for separate global small-cap mandates

While super funds have been enthusiastic investors in separate domestic small-cap mandates alongside their broad-market Aussie equities strategies, they have not been so keen, historically, on separate global small caps to accompany global core equity mandates. Andy Flynn, of William Blair, made a good case last week for a change of heart.

Andy Flynn, a co-portfolio manager for the US firm William Blair’s global small-cap growth and international (the world ex-US) small-cap growth strategies was in Australia to speak with clients and consultants following the recent publication of a paper by William Blair on global small caps characteristics and potential to add value across a global equity portfolio. The paper was written by Blake Pontius.

William Blair believes that relying on global equities, in general, runs the risk of a large-cap bias and missed opportunities. Australian super funds have not been alone in their domestic small-cap bias. The paper says that investors elsewhere have also, traditionally, pursued a regionalized approach to small-cap investing. There are several problems with this.

Over the long term, a global mix of small caps improves a portfolio’s total risk and return characteristics – moving it up and to the right of the efficient frontier. There are missed opportunities, too, from a regional approach because it does not allow stock comparisons between regions. Regional allocations will also tend to have higher correlations with their large-cap brothers within the average total home-country-biased portfolio.

The big differences in small-cap returns over the 11 years between 2004 and 2014 in the different regions, on a year-by-year basis, is demonstrated in this chart: 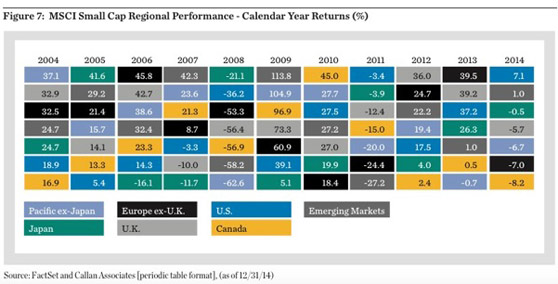 Flynn admitted that running global small caps is not easy. He said: “Running a successful global small cap strategy requires not only a significant dedication of resources given the breadth of the universe, but also an integrated team and process that enables cross-border company comparisons. As we assessed the global small cap product landscape and history prior to launching our strategy in 2012, we believed that a lack of appreciation for these points by legacy managers presented a compelling opportunity to differentiate ourselves.”

William Blair is organized by global sectors so that research and portfolio management are integrated across geographies. This gets around an issue for Australian investors when US managers sometimes just bolt together their international strategies with their US ones and call them ‘global’. “We believe our structure is more effective than a regional ‘greatest hits’ approach,” Flynn said.

Sector weightings tend to be different with small caps and some industries, such as tourism, lean towards local or regional fundamentals. But Flynn said there were many examples of smaller companies with broader geographic footprints which were clear regional or global leaders in their particular segment, or those which had an established local market presence but were beginning to expand internationally.

“Earnings growth rates are generally stronger for small caps versus large caps as you would expect, which is evident to some degree in the sector composition differences for the global small versus large indices – more consumer discretionary and industrials, less consumer staples, energy and telecoms,” he said.

As well as his portfolio management responsibilities, Flynn is active in researching small-cap IT stocks. The manager’s current IT weighting is 15 per cent versus 14 per cent for the MSCI ACWI small-cap index. Within that weighting, though, William Blair has expressed some strong views.

Flynn said: “We have generally been overweighted to the sector given compelling opportunities in areas such as IT services, particularly in Japan where the corporate spending environment has been favourable and the recurring revenue element provides consistency which we like.

“We have also been drawn to several internet software and services companies whose web-based models have high barriers to entry and generate strong returns on capital. In contrast, we have been consistently underweighted in hardware & equipment companies, where business is more cyclical and it is difficult for smaller companies to scale in order to sustain a competitive advantage.”