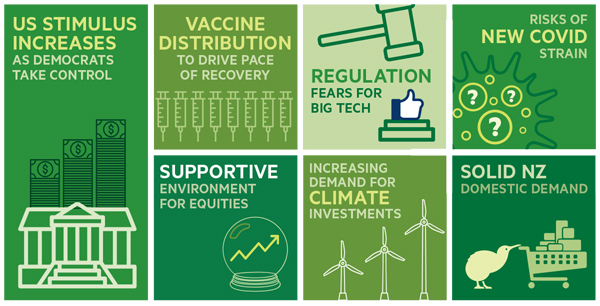 After 2020, no one can be blamed for feeling more optimistic about the year ahead.  However, 2021 got off to an inauspicious start with the political turbulence surrounding Joe Biden’s certification as the President-elect – with the US Capitol riot leading to Trump’s second impeachment.

However, markets continued to shrug off the disturbance from the insurrection as it was still digesting the implications of the Georgia Senate races – which switched the balance of power (narrowly) to the Democrats. Any market concerns about the possibility of rising taxes and increased regulations were outweighed by optimism surrounding increased stimulus measures – and while Democrats now control the Government, a tight balance in the Senate should limit opportunity for the party’s more aggressive agenda items from coming to fruition; an outcome most participants see as a positive in market terms.

On the global economic front, we expect much of the pace of recovery to be driven by the success of vaccine distributions. While it is probably true that a lot of optimism is already priced into the market on a vaccine-related economic recovery, we also believe that markets will most likely look past short-term distribution disruptions. A Brexit deal has helped clear up the political and economic picture in Europe, but the threat of the new Covid-19 strain remains.

The combination of easy monetary policy and increased stimulus should continue to support equities in 2021, with a relaxation of border restrictions and social distancing likely to benefit sectors such as travel and hospitality later in the year, and increased infrastructure spending supporting Industrial and Materials sectors. The Energy sector is also likely to see a reprieve in the short term as demand for oil rebounds, however with that industry falling into obsolescence it’s hard to get too excited about investing.  Big tech on the other hand is expected to face continued headwinds as growth opportunities decline and regulators focus on the more troubling aspects of their businesses.

As the US political outlook becomes more clear and vaccine distribution begins in full, we believe corporations will be more comfortable releasing some of the large amounts of excess cash on their balance sheets to ramp up capital investments, participate in M&A, reduce debt and increase capital return. A topic of fevered debate is the valuation of equity markets, which are expensive by historical standards and some commentators see the current level as unsustainable. The big difference between the current market and previous periods of exuberance such as the Tech boom is that interest rates are currently at record lows, meaning equities are attractive compared with government bonds so long as yields stay around where they are. 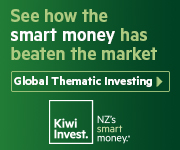 The global bounce back is expected to provide upwards pressure on yields as flight-to-quality trades unwind and inflation rises. However, we expect almost all central banks to allow inflation to “run hot” in excess of 2% prior to them even signalling that they will be raising their overnight rates – which is more likely to be a 2022 story. In addition, central banks as-a-whole (including New Zealand) remain committed to suppressing longer term interest rates via bond-buying programs. Clearly that view would change if inflation pushes up more aggressively. Our base case is that the economic damage from COVID-19 will take some time to repair with periods of fluctuating but not overaggressive inflation.

Domestically, the economy has recovered faster that most pundits anticipated, although a more comprehensive picture of the impact of border closures won’t be understood until after the height of the tourist season is over. The timing and efficacy of the vaccine distribution will of course determine border conditions, but we expect expansionary fiscal and monetary policies will continue to support solid domestic demand – and strong housing price growth to boost the wealth effect on consumption for NZ homeowners.

Kiwi Invest  is the specialist investment team behind Kiwi Wealth – providing a personal service to significant private and wholesales investors that is characterised by a long-term, global focus.